In the early to mid 1960s, an iconoclastic mode of American fiction that came to be called "black humor" presaged the larger movement succeeding it that eventually came to be known as postmodernism. This book looks at the essential features of black humor fiction, with essays on all the major black humorists: Joseph Heller, Kurt Vonnegut, Bruce Jay Friedman, Terry Southern, and more. 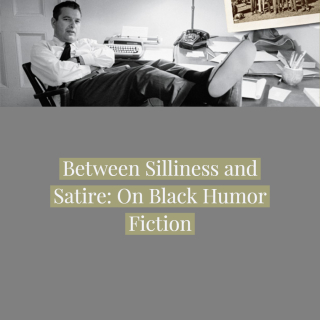 "One can't help but note that in the critical commentary about the fiction of the 1950s and 60s known as 'black humor' there is much discussion of what makes such fiction 'black,' but little of its humor. . .While it may be true that several of the novels labeled as black humor at one time or another are not 'humorous' in a narrow sense, and that the term itself was adapted somewhat arbitrarily, [Max] Schulz's reluctance to deal at length with books such as Catch-22 or Stanley Elkin's A Bad Man, clearly funny books by any measure, evidences a common scholarly preference for the 'cosmic' at the expense of the comic."

"The mockery of such comedy is implicit because, as Friedman rightly points out, it is 'out beyond satire' and does not explicitly ridicule specific behaviors or social conditions for the traditional satirical purpose of highlighting and correcting them. 'Black humor' puts this quality of postwar comedy in particularly high relief in its depiction of a world whose every feature is the appropriate subject of ridicule or lampoon, every character a figure of jest, even the protagonist (maybe especially the protagonist)."

"Elkin’s work is not merely notable for its fundamentally comic outlook—a quality Elkin shares with many of the 'postmodern' writers of the 1960s and 1970s—but is actively 'comedic' in the more specific tradition of American vaudeville or Borscht Belt comedy. Elkin’s fiction is full of sketches and routines, monologues and patter. The reader who in effect reads past these comic turns for the sake of the 'story' they presumably advance is really missing the point of Elkin’s narratives, which are structured not by 'plot' as such but by the accumulation of these bits from a comedy act"

"Of course, one quality of Vonnegut's work that certainly must partly explain its appeal is its humor, which on the one hand somewhat brightens the underlying gloom, giving the novels a tone of melancholy rather than outright despair, but on the other hand really only reinforces the portrayal of a human reality that is laughably impaired."