A collection of essays considering the current state of general-interest book reviewing. Topics include: negative vs. positive reviewing, gatekeeping, writers reviewing writers, and criticism in cyberspace, among others. 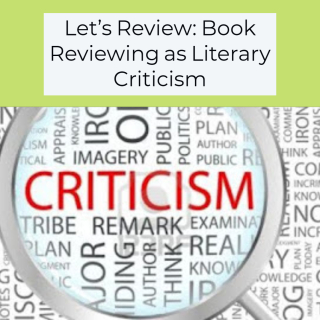 From "Book Reviewing in America":

"Critical judgment can never be avoided entirely; it always lies behind discussions of aesthetic merit. But in my opinion, judgment is only the precursor to criticism, its necessary spark but not at all its fulfillment, which is only to be found in the further elucidation of the way the work constitutes itself as a work of fiction or poetry, of the specific nature of the experience of reading the work attentively."

"That some reviews elevate shallow and superficial pronouncements over considered judgment does not mean negative reviews that are carefully considered should be equally rejected. Moreover, writers themselves should welcome the latter sort of review, since it signifies the work has been taken seriously and given close attention. This seems to me an infinitely preferable response than empty praise, which, in the absence of the more rigorous standards implied by the possibility of a negative judgment, is all that reflexive approval is destined to become."

"A positive review does not have to be merely an instance of book cheerleading, however. I would argue that a genuinely "carefully thought out" positive review can be harder to do well than a negative review, since writing a review of a book one finds disappointing, or even actively dislikes, focuses a critic's attention in a way that can be more difficult when trying to account for what one likes in a good book. . .A successful book, a book that consistently engages attention and fulfills its aesthetic ambitions, can challenge the critic to go beyond generic praise and empty accolades, to summon a critical language that doesn't simply repeat, in different variations, 'This is a good book.'"

"I would argue that the primary legacy of the literary blog consists of its questioning of the hegemony not of print but of those critics and reviewers claiming the imprimatur of authority on the basis of little more than their access, however much achieved through perceived merit, to the limited supply of critical outlets in print. That so many of the first wave of bloggers have subsequently achieved considerable status as writers and critics, online and in print, makes it pretty clear that 'merit' was a more widely dispersed phenomenon than some critical 'gatekeepers' would have had us believe."