A  study of the novels of the American writer James Purdy. Includes discussions of most of the novels, although some emphasis is given to the paradigm-establishing works of the 1960s and 1970s. 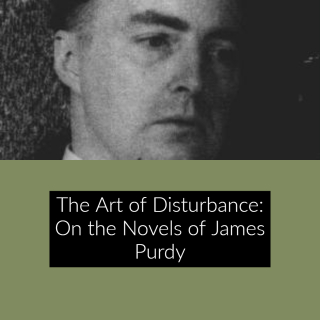 "Although in some ways Purdy was altogether attuned to the literary spirit of his time, especially in the 1950s and 60s, he gradually and increasingly became much less so. However, the way in which he remained true to the vision, style, and assumptions animating his fiction from the beginning in my view will only make that fiction more valuable to future readers, as I hope my analysis of Purdy’s most representative books will show. Looking at Purdy's most representative books shows why Purdy’s fiction was at first difficult simply to ignore but increasingly was ignored, in part, no doubt, because Purdy was a prolific writer, but also precisely because Purdy consistently adhered to core stylistic and formal assumptions and explore recurring themes."

"Few of his novels (Narrow Rooms is a prominent exception) focus insistently on the fact of homosexuality or feature characters defined by their sexuality, or whose fate is determined by it. They do focus on characters unable to feel freely, to let themselves experience love, characters whose dominant desire toward other people is the desire to exploit them. To the extent that this entails a denial of homosexual love or a refusal of homosexual inclinations, Purdy’s work is obviously relevant enough to the consideration of gay-themed writing, but the emotional debilitation depicted in Purdy’s fiction, including 63: Dream Palace, is one suffered, indeed is ultimately caused, by American culture at large."

"The attempt to give shape to reality through writing (in some cases, through artistic expression in general) is a common motif throughout Purdy’s work, but where one might expect a writer of fiction ( a writer of “artistic” fiction, in fact) to celebrate the possibilities of fiction as a way of finding aesthetic order at least in a chaotic and meaningless reality, Purdy instead exposes such aesthetic ordering to a withering critique. In Malcolm, this critique is directed not just at Mr. Cox, who is most immediately attempting to turn Malcolm’s life into a narrative of his own devising, but directly at his own practice as a novelist."

"If it is possible to identify the beginning of James Purdy’s long fall into neglect and disfavor, it is arguably in the publication and reception of Eustace Chisholm and the Works (1967), specifically in its open treatment of homosexuality and in the frankness of the characters’ assumptions about sexual desire. This must have been an unsettling book for readers expecting Purdy’s next novel to be another similarly extravagant comedy. Although this novel has its share of odd and eccentric characters, the setting in which these characters are placed—Chicago in the midst of the Great Depression—hardly seems to promise hilarity. Indeed, this increasingly grave and somber novel, climaxing in scenes of brutal violence. comes as close to being describable as tragic as any of Purdy’s narratives."